From Lewis acids to peptide chemistry

Despite the importance of peptide synthesis in medicinal chemistry, the current organic synthetic methods for peptides were developed almost 50 years ago. Completely new synthetic methodologies are therefore clearly necessary for modern organic synthesis. This article summarizes several new aspects in this regard from our laboratory.

In the 1970s, we initiated research into Lewis acids, an amazing area of organic chemistry. Lewis acids coordinate to various functional groups in substrates. After coordination, the reactivity of the functional group changes significantly. This new chemistry of Lewis acid catalysts opened a new door for initiating numerous new reactions for organic synthesis. For example, after coordination by a Lewis acid, the carbonyl group reactivity changes completely[1]. We have published numerous studies and revealed several leading principles of these new reactions[2]. However, the changes in reactivity are only for one functional group of a given substrate. This chemistry is known as a “reagent-controlled” or “catalyst-controlled” reaction. In fact, most of the organic reactions known to humans originate from reagent-controlled reactions. In contrast, most biological reactions in the human body proceed through multiple functional groups of the same substrate. This multi-functional interaction is known as a “substrate-controlled” reaction. We are interested in substrate-controlled reactions and have reported a number of reactions, including the asymmetric epoxidation of olefinic alcohols[3,4].

In 2010, I decided to change my research area and initiate research toward peptide synthesis. The history of peptide synthesis really began in the 1960s. At that time, Dr. Merrifield reported an amazingly useful solid phase peptide synthesis (SPPS), and since then, the method has been broadly used in research labs and industry. However, this method presents several serious problems that make the application of peptides as a new modality for the drug market very challenging. The issues of SPPS are as follows: linear synthesis; racemization; prevention of analysis during synthesis; exceedingly low yields; costly purification. These problems have also been discussed by major pharmaceutical companies in the important journal, J Org Chem[5]. In little over a decade, we succeeded in developing a completely new methodology for peptide synthesis [Figure 1]. In fact, most of our new methodology depends on substrate-controlled reactions, in spite of Merrifield’s method that depends on reagent-controlled reactions.

Let me give you some examples of the differences between the two methodologies. Most of the SPPS method depends on reagent-controlled reactions. Specifically, the method depends on carboxylic acid activation. Numerous activation reagents have been developed, and in fact, many are commercially available. Our substrate-controlled reactions depend on tantalum-catalyzed reactions [Figure 2]. Ta metal has a strong affinity to oxygen but a weaker affinity to nitrogen. This unique property plays an important role in this transformation and no other metal ions work for this purpose[6-8]. 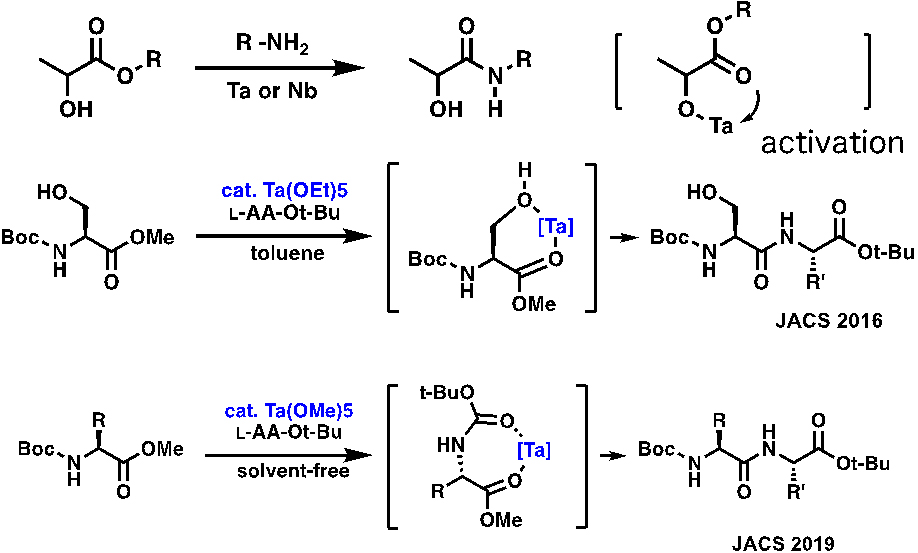 Starting with this peptide synthesis, we decided to develop a completely new and transformative methodology from the previous SPPS methodology.

We have successfully changed from a linear to a convergent synthetic route [Figure 3]. This is related to the later described protecting group-free strategy, where the protecting group-free protocols for both the head and tail amino acid and carboxylic acid groups are successfully activated to realize the simultaneous synthesis from three components (m + n + o). As a result, not only can 50-peptide insulin be synthesized but also the 100-peptide limit is closer to being achieved[9]. 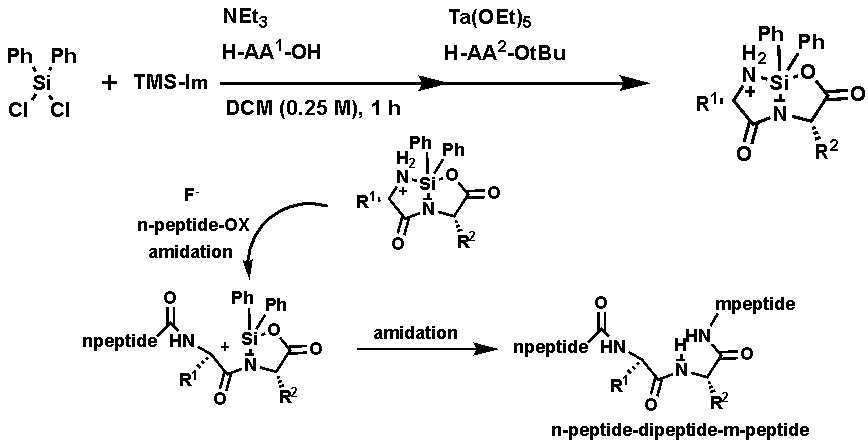 Amide to amide transformation is reasonably rare in organic synthesis. In this case, an amide bond is activated by the Boc group of an amino acid to thus generate a new longer peptide. The method can also be used for peptide bond formation as a convergent methodology [Figure 4][10]. 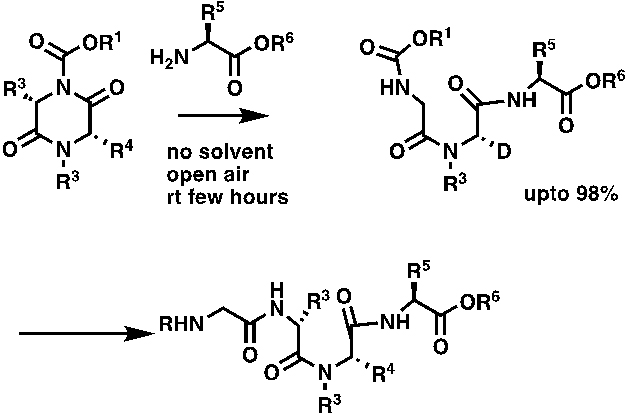 Use of safe solvents

In order to use solvents safe for humans, we have developed a supersilyl method that increases the lipophilicity of peptides and have successfully used ordinary solvents, such as ethyl acetate, toluene, and acetonitrile [Figure 5][10].

Figure 5. Supersilyl as the key to high hydrophobicity.

Reduction in use of resin materials

Since this is a solution method, the expensive solid resin is not used. In fact, solid phase peptide synthesis is based on resin, which has a rather large molecular weight and, moreover, is difficult to analyze after the reaction.

Using protecting Fmoc groups in our flow synthesis, a high purity tetrapeptide was obtained with a 90% yield in three steps [Figure 7]. Flow synthesis fulfilled the role of providing a component in the above-mentioned convergent synthesis. The pentafluorophenyl ester plays the following important roles in our peptide synthesis. First, it enables a high reactivity of activation of carboxylic acid. Second, it enables the reaction proceeds in three minutes at room temperature. Finally, it allows a substrate ratio of 1:1 to be used for the process[10].

Since this basically is not a carboxylic acid activation method, racemization does not require consideration, and because a hydrophilic supersilyl method is used, an ordinary simple short path column is sufficient 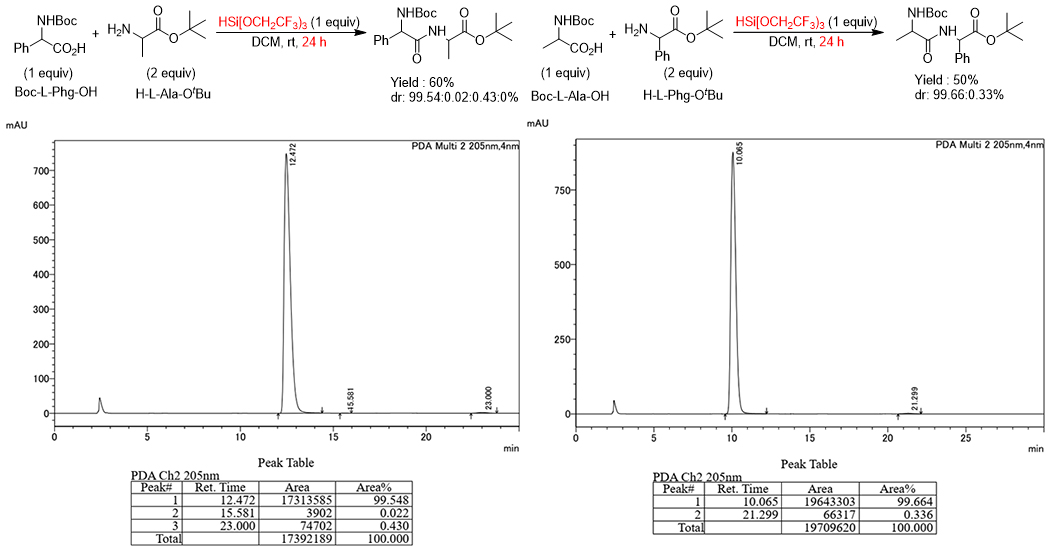 Because the reactants are very inexpensive and have low molecular weight, the number of steps is small, and high concentration reactions are possible, the process mass intensity is exceedingly small.

Henceforth, we can confirm the social implementation of this new synthesis method through joint research with companies and simultaneously make daily efforts to make the method more elegant. In particular, we have started to develop a catalytic reaction with less than a 1% catalyst loading without using stoichiometric reagents and further focus on developing a higher quality process using data-driven chemistry.

Even with these findings, there remain significant opportunities for new innovation. I believe peptide synthesis is truly a science of tomorrow, and I hope more young scientists join this amazing area.

The author contributed solely to the article.

The author declared that there are no conflicts of interest. 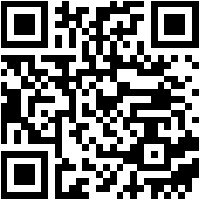