In recent years, fluorescent supramolecular materials have received significant attention due to their wide application prospects. However, the relationship between the conformation of supramolecules and their photophysical properties remains an open question. In this study, two rhomboidal metallacycle isomers, SA and SB, self-assembled with trans- and cis-isomers of tetraphenylethylene-based ditopic pyridyl ligands (LA and LB), and a 120° di-platinum (II) acceptor were prepared. Compared with metallacycle SB constructed by cis- tetraphenylethylene (TPE)-based ligand LB, the curved rhomboidal metallacycle SA constructed with trans-TPE-based ligand LA can restrict molecular motions of the aromatic groups on TPE and exhibits better light-emitting properties. Moreover, curved SA also exhibited better fluorescence stability than isomer SB towards molecules with strongly electron-withdrawing groups. This work provides a new platform to explore the relationship between conformation and the corresponding photophysical properties.

In the past decades, fluorescence materials have attracted considerable attention for their widespread applications in biological imaging[1], environmental sensing[2], fluorescent probes[3], and other fields[4] due to their high luminous efficiency and stimulus responsiveness. However, conventional organic fluorophores often suffer from aggregation-caused quenching (ACQ) in a concentrated solution or the solid state, which limits their practical application[5]. To overcome the undesirable ACQ, in 2001, Tang and co-workers developed fluorescent species exhibiting the opposite effect, known as aggregation-induced emission (AIE)[6]: tetraphenylethylene (TPE), 1,1,2,3,4,5-hexaphenylsilole, triphenylamine, distyrylanthracene, etc[7]. The characteristic of molecules with AIE activity is that their initial free rotation is restricted in an aggregation state, resulting in reduced non-radiative decay and strong fluorescence emission. However, AIE active molecules have relatively low luminous efficiency in dilute solution because the free rotation of benzene rings leads to high non-radiative decay.

Among the diverse field of supramolecular chemistry, coordination-driven self-assembly offers a straightforward synthetic approach for constructing diverse metal-organic complexes (MOCs)[8], ranging from two-dimensional (2D) metallacycles to three-dimensional (3D) metallacages. The metal coordination bonds not only provide definite directionality and high predictability but also have moderate bond energies (15-25 kcal/mol) to ensure self-modulation and thermodynamic stability during self-assembly. These unique advantages allow MOCs to be well constructed with specific stoichiometry and precise geometry and, thus, provide the impetus for applications in catalysis, sensing, and optics[9]. Recently, MOCs combined with AIEgens have also drawn particular attention as multifunctional platforms for exploring AIE properties. However, how to provide the bright emission of AIEgens in dilute solution is still a big challenge. Rational synthesis strategies should be developed to restrict the rotation of phenyl rings by slightly adjusting the conformation of the AIE group via metal coordination. In this way, the non-radiative decay in the excited state can be further reduced, thus giving a bright emission in dilute solution, which is also known as coordination-induced emission (CIE).

Herein, we provide such a CIE strategy via constructing two rhomboidal metallacycle isomers SA and SB by the self-assembly of trans- and cis-isomers of TPE-based ditopic pyridyl ligands (LA and LB) with a di-platinum (II) acceptor. It is worth mentioning that these two ligands can be easily obtained through one-pot synthesis and separation by column chromatography. In contrast to SB constructed by cis-TPE-based ligand LB, the curved rhomboidal metallacycle SA based on trans-TPE-based ligand LA could restrict molecular motions of the TPE aromatic groups, inducing the integration of AIE and CIE and thus showing double the quantum yield as SB. Moreover, curved SA also exhibited better fluorescence stability than isomer SB towards strongly electron-withdrawing molecules.

The synthesis and characterization of the 120° di-Pt(II) acceptor 1 and the two ditopic ligands LA and LB are shown in the supplementary materials [Supplementary Figures 1-11]. The two isomeric ligands LA and LB can be obtained in a 1:1 product ratio by one-pot Suzuki coupling reactions and column chromatography (SiO2). As shown in Scheme 1, the obtained 180° trans-TPE-based ligand LA and 60° cis-TPE-based ligand LB were assembled with the same 120° di-Pt(II) acceptor 1 in a 1:1 stoichiometric ratio in DMSO at 80 °C, affording the metallacycles SA and SB, respectively. After 10 h, the final discrete metallacycles were obtained in quantitative yields (94% for SA and 92% for SB) by sedimentation and centrifugation. 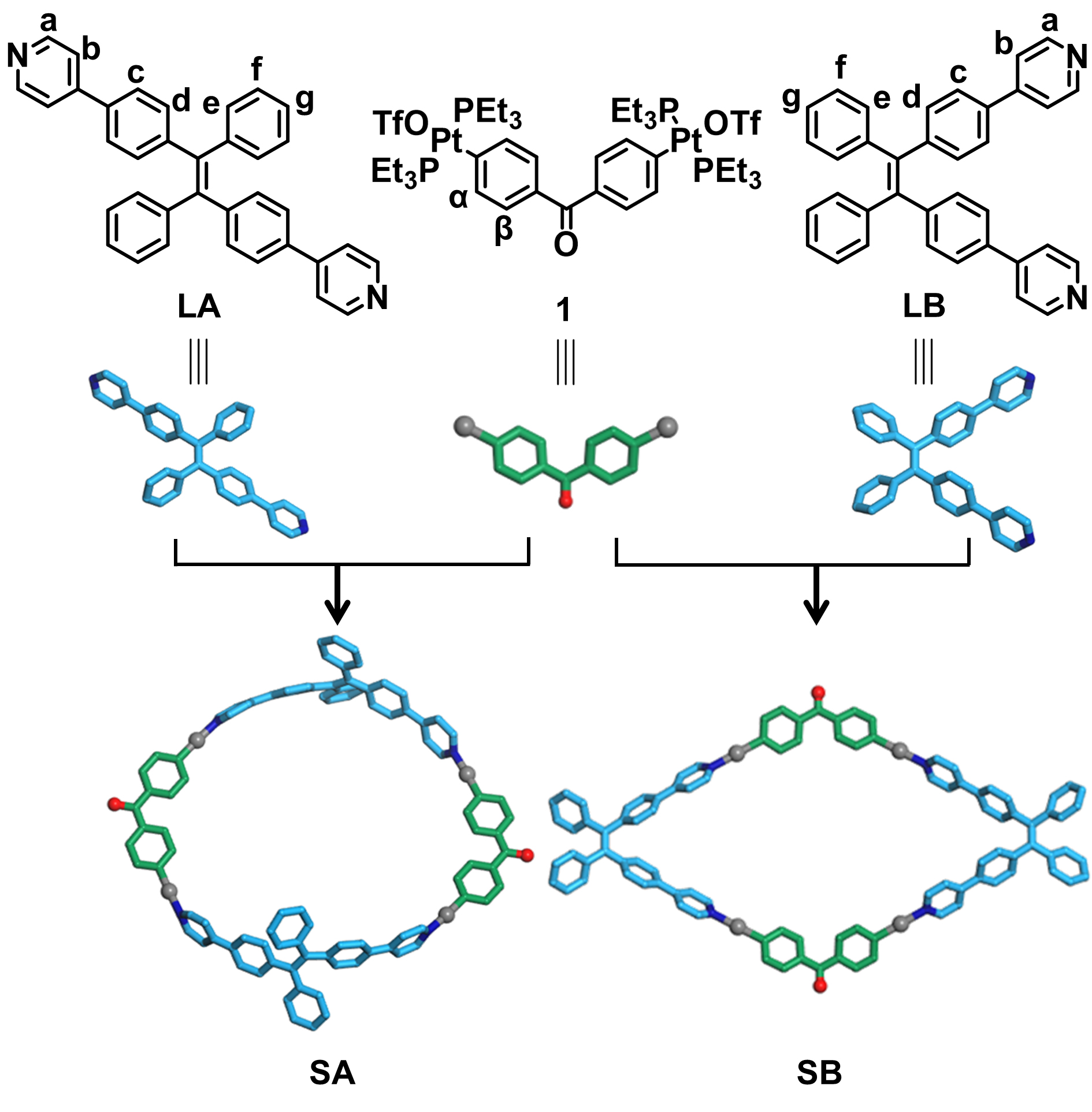 The formation of discrete metallacycles SA and SB with highly symmetric architecture was first investigated by multinuclear NMR analysis [1H, 31P{1H}, 13C, 2D correlation spectroscopy, and 2D diffusion-ordered NMR spectroscopy (DOSY)] [Figure 1A-H and Supplementary Figures 12-23]. It is evident from the 1H NMR spectra [Figure 1A-E] that no linear structures were formed. If a linear structure were formed, the proton signal of the ligands in these complexes would show more peaks due to the asymmetric chemical environment. In the 1H NMR spectra [Figure 1A-E], the signals of protons corresponding to the pyridyl units and phenyl rings in metallacycles SA and SB exhibited downfield shifts relative to those of the free TPE ligands due to the loss of electron density after the formation of Pt-N coordination bonds. For metallacycle SB, the signals of the pyridyl and phenyl protons split into two sets upon metal coordination, being consistent with the previously reported MOC structures[10]. 2D diffusion-ordered spectroscopy (DOSY) in DMSO-d6 showed a single band at log D = -10.19 for SA and -10.26 for further proving the formation of a single discrete structure. The diameters of SA and SB derived from the log D values by the Stokes-Einstein equation were 3.04 and 3.58 nm in DMSO, respectively, which matched well with the size of the expected structure. The 31P{1H} NMR spectrum of di-Pt(II) acceptor 1 and metallacycle SA both exhibited a single peak with concomitant 195Pt satellites ( for 1 and δ = 13.16 ppm for SA) [Figure 1F and G]. However, the 31P{1H} NMR spectrum of metallacycle SB exhibited doublets (ca. 13.14 and 13.19 ppm) with concomitant 195Pt satellites, which could be attributed to the different chemical environments of phosphorus inside and outside the metallacycle Compared with di-Pt(II) acceptor 1, these peaks were shifted upfield by approximately 5.83 and 5.82 ppm for SA and SB, respectively. Furthermore, electrospray ionization mass spectrometry (ESI-MS) proved effective in determining the molecular formation of the obtained assemblies. One set of peaks with different charge states in the SA and SB systems was observed from the full ESI-MS spectra, due to the loss of different numbers of OTf- counterions [Supplementary Figures 24 and 25]. In the ESI-MS spectrum of SA [Figure 1I and Supplementary Figure 26], a peak at m/z = 1068.7 Da corresponding to [M-3OTf-]3+ was observed. After the deconvolution of m/z, the molecular weight of SA was calculated to be 3652.94 Da, demonstrating the formation of a [2+2] assembly. Metallacycle SB showed the same fragments as obtained for SA (m/z = 1068.7 for [M-3OTf-]3+, m/z = 1677.5 for [M-2OTf-]2+ and had the same molecular weight (for the relevant calculation method, see Section 4 of the Supplementary Materials). These peaks were isotopically resolved and in good agreement with their calculated theoretical distributions, indicating the formation of distinct metallacycle structures SA and SB. We failed to obtain single crystals of SA suitable for X-ray scattering due to its curved configuration that restricted the easy stacking of the metallacycle molecules. Instead, density functional theory (DFT) calculations were performed to simulate the supramolecular structures of SA [Figure 1K]. Fortunately, single crystals of SB were successfully obtained by slowly diffusing isopropyl ether into the acetone solution of SB over four weeks; the corresponding single-crystal structure is shown in Figure 1L. The detailed crystal information is shown in Supplementary Figures 28 and 29 and Supplementary Table 1. From the optimized structure of SA and the crystal structure of SB, it is evident that both were rhomboidal metallacycles, and SA exhibited a certain degree of bending. This unique structural feature laid a solid foundation for subsequent studies on the different luminous behaviors of the metallacycles. 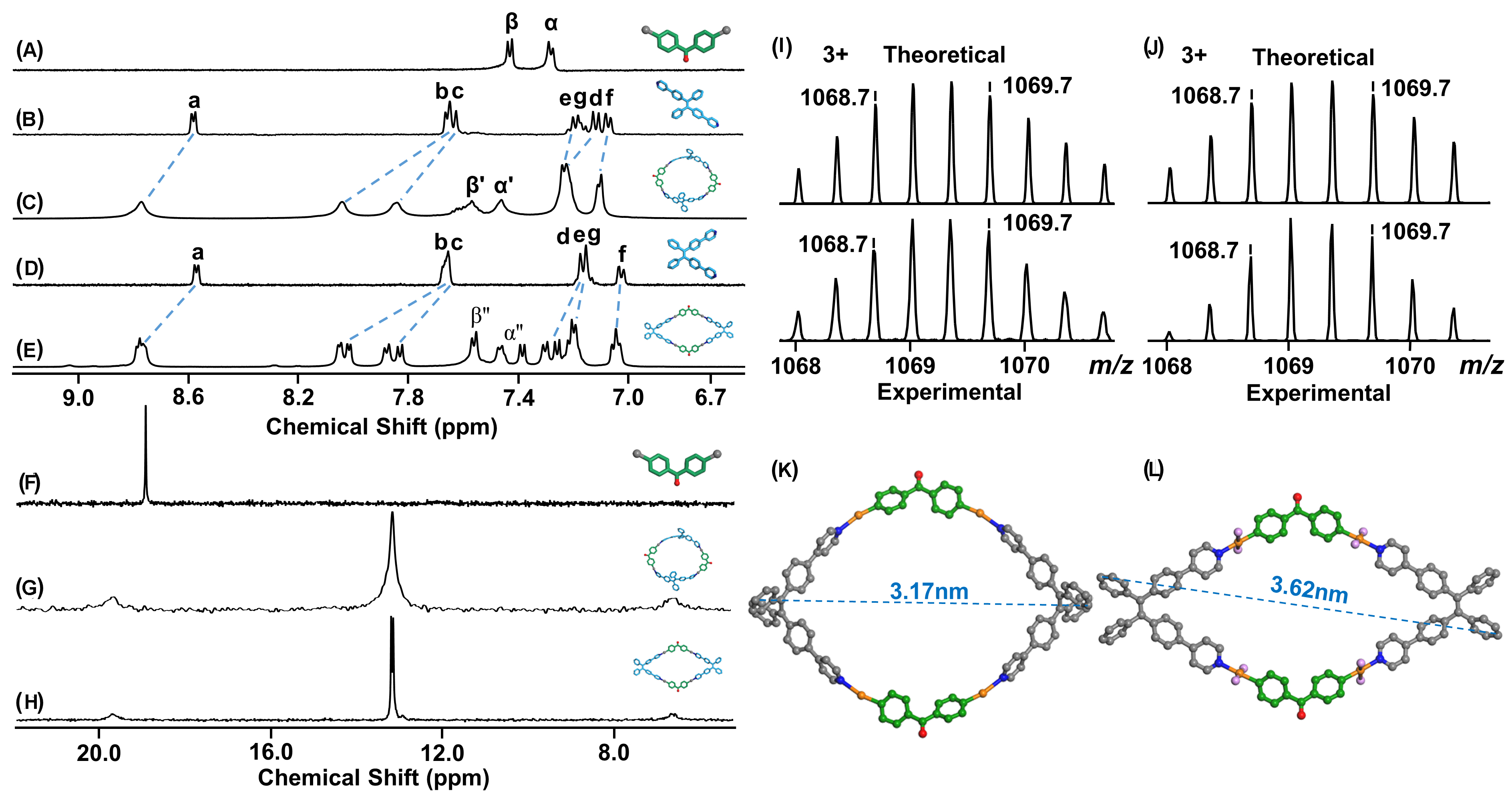 After the successful construction of metallacycles SA and SB, their photophysical properties were studied. The absorption spectra of ligands and metallacycles are shown in Figure 2A. Ligands LA and LB displayed two similar broad absorption bands at 270 and 330 nm, originating mainly from pyridine and TPE. Due to the metal to ligand charge transfer (MLCT) after coordination and forming SA and SB, the two absorption bands were, respectively, red-shifted to 315 and 355 nm in SA and 315 and 365 nm in SB. Moreover, these assemblies exhibited significantly enhanced molar absorption coefficients because of the inclusion of two ligands in one metallacycle structure. Next, fluorescence spectra of ligands and metallacycles were also recorded [Figure 2B]. Ligands LA and LB showed weak emission at 485 nm in DMSO, which can be ascribed to the non-radiative relaxation pathway via intramolecular rotations of the phenyl and pyridyl rings. After assembling ligands into rhomboidal metallacycles, the emission intensity was enhanced and red-shifted by ~20 nm (505 nm). Compared to the normal rhombus metallacycle SB, the molecular motions of the aromatic groups on TPE are more restricted by coordination bonds in the curved metallacycle SA, decreasing the non-radiative decay and thus giving a brighter emission. Consequently, the obtained ΦF value of SA in DMSO was 6.47%, significantly higher than the ΦF of SB in DMSO (3.21%). The absorption and emission spectra of metallacycles SA and SB in the solid state were further explored Two similar broad absorption bands at 320 and 430 nm were observed from solid SA and SB. Solid SA also exhibited a long-wavelength absorption band centered at 525 nm, mainly corresponding to intramolecular charge transfer. Interestingly, a different fluorescence emission behavior was observed for metallacycles SA and SB in the solid state. Again, the intensity of the maximum emission peak of SB was significantly lower than that of SA and was 30 nm red-shifted compared with SA. Notably, the ΦF values of metallacycles SA and SB in solid state were 26.17% and 23.14%, respectively, which were substantially higher than those obtained in the solution and displayed a typical AIE effect 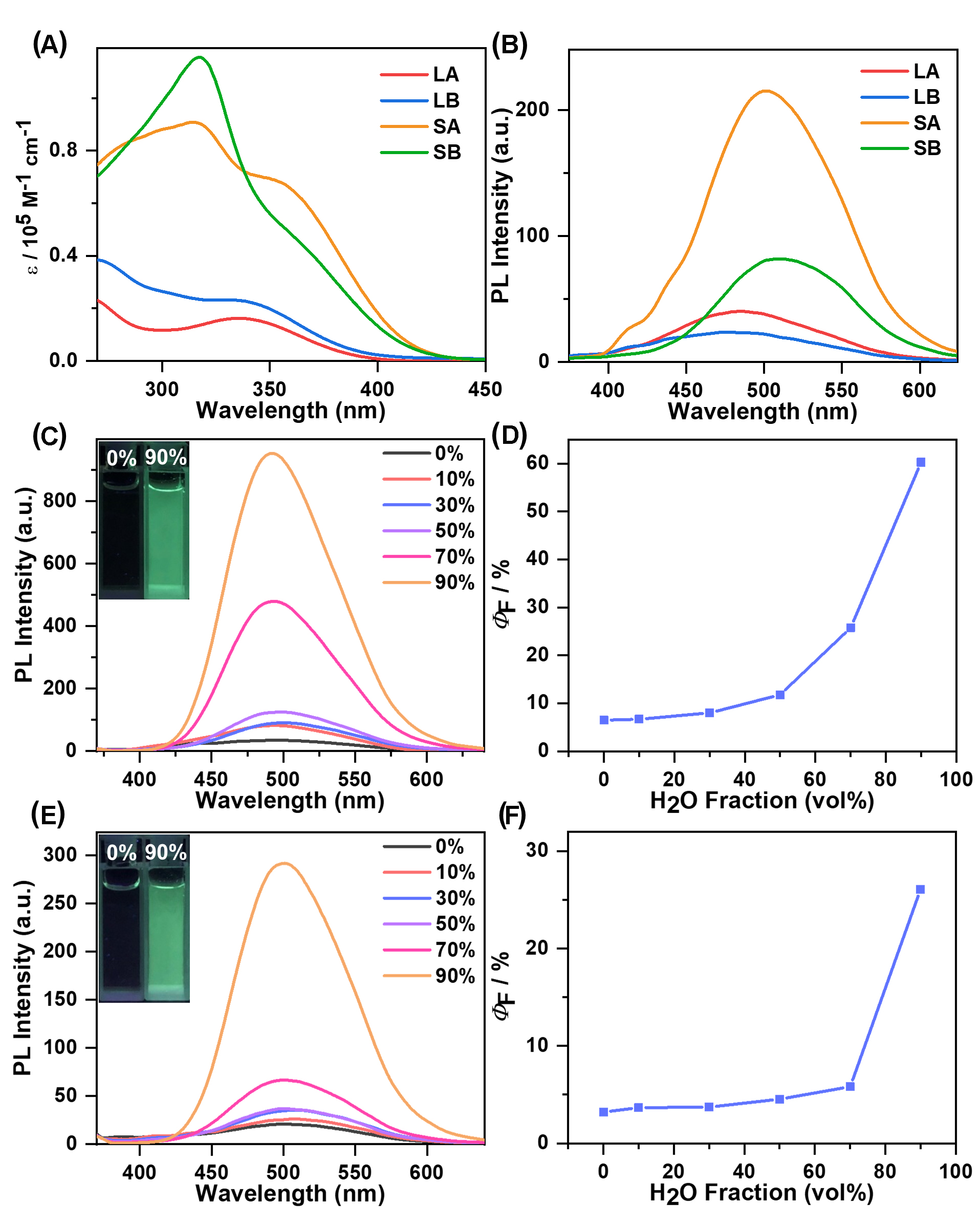 To investigate the AIE properties of metallacycles SA and SB, their fluorescence emission spectra in DMSO and DMSO/H2O mixture solutions were recorded [Figure 2]. Adding water to the DMSO solution reduced the solubility of SA and SB, thereby promoting aggregate formation. Upon successive increments in the water content, the fluorescence intensities of SA chronologically increased and reached a maximum at 90% H2O content [Figure 2C]. Its fluorescence quantum yield continued to increase with the rising water content and matched well with the change in fluorescence emission intensity [Figure 2D]. As anticipated, the fluorescence results demonstrate the AIE behavior of SA. Metallacycle SB displayed a similar AIE phenomenon [Figure 2E and F]. Interestingly, in the aggregated states (H2O content = 90%), the fluorescence intensity of SA increased up to 27 times (ΦF = 60.28%), whereas SB displayed only a 14-fold fluorescence enhancement (ΦF = 26.08%). The more curved structure of metallacycle SA may promote the tight packing of TPE units in the aggregated state, enhancing its fluorescence remarkably. Moreover, the restricted movement of phenyl rings of TPE in SA further enriched its fluorescent performance compared to SB. 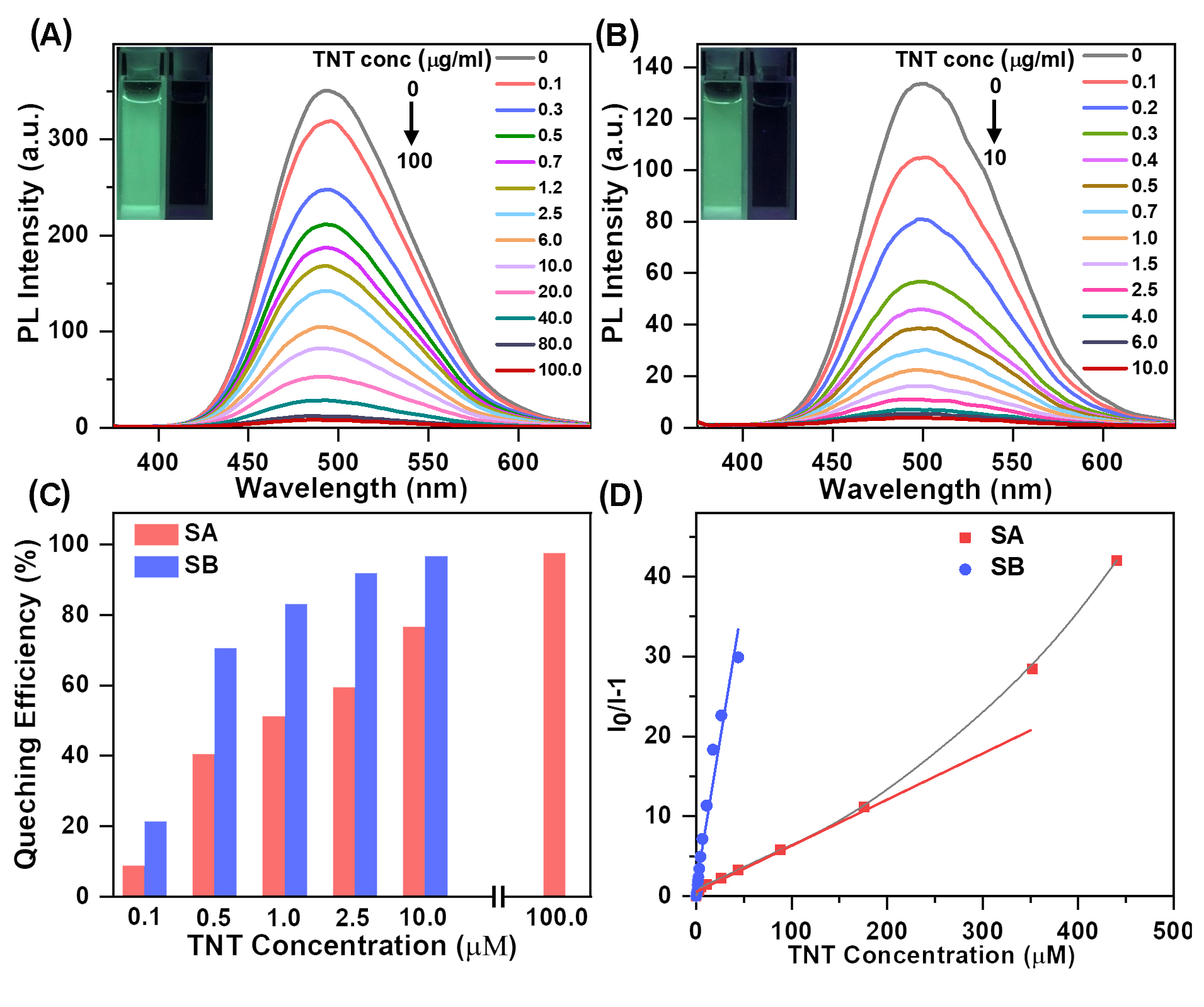 This study was supported by the National Natural Science Foundation of China (22071079 for Wang M). The authors thank the staff from the BL17B beamline of the National Facility for Protein Science in Shanghai (NFPS) at Shanghai Synchrotron Radiation Facility for assistance during data collection.

This study was supported by the National Natural Science Foundation of China (22071079 for Wang M).

All authors declared that there are no conflicts of interest. 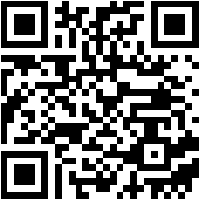